and you just played your first game of Pong on the Atari. A simple, two-dimensional sport game simulating table tennis. Now, in just a little over 40 years, we are already exploring the implications and applications of augmented and virtual reality(VR).

What will happen in the next 40 years?

Our phones have more computing power than what we used to get Apollo 11 to the moon.

In this digital age, we have access to so much information and data. As computing power and big data collection grows, we are able to train systems to probe complex data to learn and perfect clearly defined tasks. The definition of AI is contingent upon certain fields of study.

For example, AI means different things to computer scientists, cognitive scientists, and engineers. Generally speaking, artificial intelligence is the design, implementation, and use of machines, programs, and systems that exhibit human intelligence traits like learning, reasoning, and knowledge representation.

The external aspect of AI is all about perception. Asking yourself, do you feel comfortable interacting with the system? Is the system reasonable? The internal aspect contains the learning systems. They learn from information that is stored and shared in a cloud which allows input and responses to be analyzed with blockchain technology.

When the internal and external components come together, we are dealing with Artificial Intelligence. As technology catapults us into the future, the debate continues to arise in whether AI will foster unemployment and socio economic disruption, or help humanity progress, explore, and learn with these technological advances.

How did we get Here?

Beginning in the 1950’s, early AI research began to explore symbol recognition and simple problem solving tasks. In the next 20 years, scientists began playing around with early neural networks and having conversations about “thinking machines”.

“By 2050 some experts believe that machines will have reached human level intelligence.”

An example of early AI application was DARPA’s completion of street mapping projects in the 1970’s. Once the neural networks were in place, we began making strides in machine learning, intelligent tutoring, scheduling, and data mining. A memorable milestone was the Deep Blue chess program that beat Garry Kasparov, the world chess champion, in 1997.

From about 2010 onward, we have been experiencing breakthroughs in deep learning  which drive AI funding, research, and publicity. Technology giants like Facebook are using AI for photo tagging, targeted advertising, and curated news feeds. Google’s search engine has been dependent on rudimentary forms of AI from its launch. Consider it a race for AI and AGI(which is the intelligence of a machine that can successfully perform all intellectual tasks a human can.)

But hey, a little competition never hurt anyone.

Data mining serves as the foundation for both artificial intelligence and machine learning. It is an area of development that has been around for almost a century. Alan Turing spearheaded the idea of a universal machine that was capable of performing computations.

The modern computer is built on the concepts pioneered by Turing. He is also known for the development of the ‘Turing Test,’ which determines whether a computer has real intelligence or not. To pass the test, a computer must fool a human into believing it is human.

Forbes reports that “by 2020, our accumulated digital universe of data will grow from 4.4 zettabytes to 44 zettabytes.”

At the end of the day, how we acquire and learn from data serves as the bedrock for emerging technologies.

One example of emerging technology is bitcoin and blockchain. Created by Satoshi Nakamoto, an anonymous person or group in 2009, bitcoin is a digital currency in which transactions are made with no middle men, meaning no banks. There are no transaction fees, and the purchases are anonymous. As of 2018, the value of one bitcoin is the equivalent of over $10,000.

Now, in less than 10 years, there are over 1,000 digital currencies circulating. Entrepreneurs are using blockchain technology to vastly improve and jumpstart their products and services.

Start ups are able to raise millions of dollars through ICO’s(Initial Coin Offerings,) or a company’s direct issuance of its “own” branded digital token. Currency solutions are just the tip of the iceberg with blockchain technology.

In a technical sense, blockchain concatenates(chains) cryptographically verified transactions into sequences of lists(blocks). It’s double-entry bookkeeping(assets and liabilities) with an added entry, a verifiable cryptographic receipt of any transaction.

It is way more efficient than traditional systems. Overall, cryptocurrency is cheaper, safer, and more reliable.

While complex in nature, it has profound societal impacts. For example, it is a catalyst in promoting a better sharing economy through service aggregators, new manufacturing like 3D printing, and digital contracting.

Blockchain is a foundational technology with the potential to transform our economic and social systems. Of course, the banking industry and federal government are not the biggest fans of this disruptive technology. Blockchain fuels AI by sharing data in a more efficient way to build new, and better, models resulting in higher profit, lower cost, and better overall business.

Blockchain has scalability problems, but solutions are being created.

Even social ventures are benefitting from blockchain. Accenture, Microsoft, and the UN are collaborating to build blockchain for digital identity, useful for refugees who lack social documents.

As AI gets better at solving more complex problems and automating more tasks, there is concern they will replace human jobs. AI is far from having characteristics like creativity, emotional intelligence, critical thinking, leadership, and other qualities that we exhibit as humans, especially in entrepreneurs.

Automation will replace the need for us to perform specific, non-creative tasks. In 2013, researchers at Oxford University posited that in approximately 50 years “as many as 47% of all jobs in the United States are at risk of computerization”

For example, what will the economic and societal impacts look like when car eventually becomes a service? Elon Musk spearheads the self driving car revolution, using automation and AI processors in his open-sourced fleet of Tesla technology. 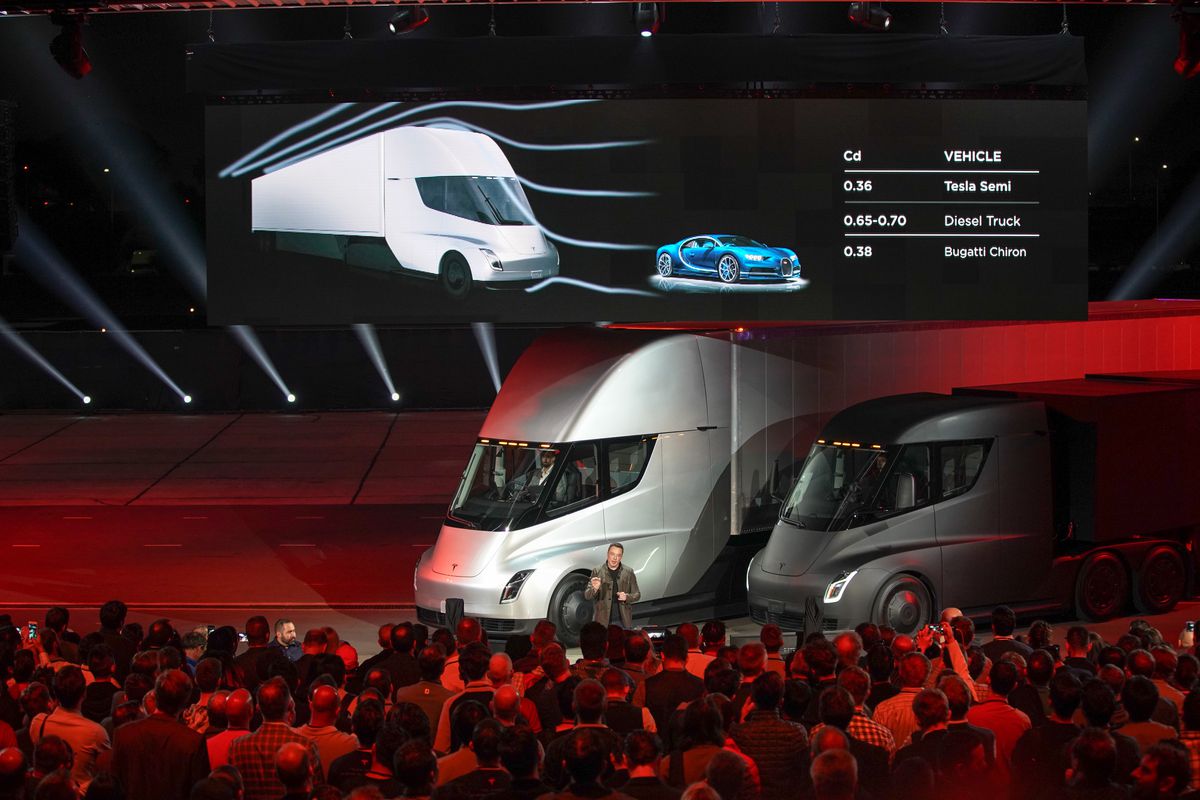 The self driving revolution is not that far from reality. Recently, the costs and specs of the 300 and 500 mile range Tesla semi-trucks were released. Companies like Walmart, and freight company J.B. Hunt, are already ordering prototype fleets. The $726B trucking industry accounts for ~2 million jobs.

Naturally, the trucking industry and unions are worried about losing those jobs. However, one should consider the economic, social, and financial costs of motor accidents. Motor accidents accrue costs of ~871B each year in economic damages, loss of productivity, and other social harm.

Is there a way to compensate the lost labor wages(jobs) through the cost savings(economic, social, and financial motor accident) we would save?

From an entrepreneurial standpoint, there is much debate in the tech environment. Elon Musk warns of the risks artificial intelligence may have on the world. Before Google bought DeepMind, Musk was an investor in the AI research company.

From the inside looking out, Musk said that “it gave me more visibility into the rate at which things were improving, and I think they’re really improving at an accelerating rate, far faster than people realize.”

On the contrary, Bill Gates, who ushered in the personal computer, does not agree with Elon Musk. Gates believes that AI will make our lives more productive and creative, but he is concerned about super intelligence.

One thing is certain, they both believe it will be the future. Technical skills will still remain important, but the days of repeating mundane tasks are ending. We need to focus on human skills that place emphasis on higher-order thinking and emotional intelligence.

Revolutions are Happening at Concerning Rates

Looking back, technological revolutions have always been met with resistance, but our innovation and creativity prevailed.

As we follow this trend, we are getting rid of mundane, task oriented jobs and even some higher up the value chain, like accountants and lawyers.

Even though some jobs will be lost, it will promote entrepreneurism. As AI reduces simpler, task driven jobs – it will give us more opportunities to combine creativity with risk taking endeavors, which is what being entrepreneurial is all about.

Value creation will rely more heavily on creativity, innovation, emotional intelligence, sustainable relationships, and leadership; the very skills that AI and automation lack. In a sense, “think of artificial intelligence as scaling people“.

However, there will be massive disruption. The World Economic Forum states that we are in the midst of a fourth industrial revolution. The first(steam power), second(electrical power), third(automation), and the fourth, combines automation and AI.

The low and middle-skilled jobs will be hit the hardest, which might be a contributing factor to our country’s(and the U.K.’s) nationalistic response, in opposition to the effects of globalization and technology.

AI research and development teams from major companies and cross-functional teams continue to tackle arduous AI and Machine Learning. The problem is that so few people are trained in the various fields of study to even comprehend their work.

“The demand for AI experts has grown exponentially over the last few years. As companies increasingly adopt AI solutions for their businesses.”

Universal Basic Income, too Good to be True?

In order to combat the massive disruption, serious consideration has been given to universal basic income(UBI).

A few prominent figures like Richard Branson, Sam Altman of Y combinator, and Ray Kurzweil a Google Executive, all support (UBI). People receiving UBI are given a standard amount of money. Y Combinator launched their UBI experiment in Oakland, California in which 100 people are receiving $1,000 a month.

Finland, and a few other European countries are also testing this system. They argue that it alleviates poverty, ameliorates the automation problem, and encourages people to take risks and invest.

Imagine if people were provided with a very small safety net, say approximately $1,000 a month. This safety net would promote entrepreneurialism at a micro and macro level. As more work gets done by machines, people can spend more time on other activities like leisure and amusement but also invention and exploration.  As the world adapts to technological advances, so must our attitudes towards work.

The significant interest in the industry of artificial intelligence illustrates how disruptive some companies and technologies can be to existing companies and government institutions. There is also serious demand for AI talent acquisition.

Funding for AI has grown approximately 60% since 2010. The United States leads the world with $10B in venture capital for AI, employing approximately 850,000 people.

As we ride this technological wave, time will only tell where we head into this uncharted territory. As technology transforms our environment, we need to ask ourselves, what is really important? The future we want. And then figure out which tools to use to get us there.

If we’re a tool-making, tool-using species that uses technology to solve human problems, then the real question is this: what problems shall we choose to solve?